I wanted to let you know that Thomas arrived safe and sound and is SUCH a joy! EVERY moment in the house sounds like Christmas morning because the kids are giggling non stop. We have named the puppy Logan Thomas.We picked him up at Logan airport and for so many days we kept saying "we are picking him up at Logan" that we ended up liking that name.

He is sitting here with me know and he wants you to know that Spencer and Ella are very gentle with him and spoil him non stop. This morning he did not want them to leave for school and tried to climb into each of their backpacks!Then he tried to follow them to the bus! All I could think about was "Mary has a little lamb". I will have to start to sing " Ella had a little yorkie". They were waving to him from inside the bus. They adore him.

There is a spot shoveled out of the snow that he goes to for going to the bathroom and he goes every time and then runs run back to the house. He is so cute! He loves his bed and pen and all the toys. My Mom, his Nana, made him a fleece blanket with ties on it that he LOVES! As soon as Spencer and Ella come home from school he is right there with them. He loves playing with them, but also likes just sitting on their laps.

He went to the vet yesterday and they loved him and said he is great.(We already knew that!) We also gave him a bath yesterday and he was wonderful.

The first night he was here he cried a bit, but we all checked on him and he settled in. Last night when we said goodnight there was no crying. A little bit of wimper, but not much. I was happy to think that he already knows he is safe here.

He loves being in the car!We bought him a car seat so that he could sit the kids and he thinks this is just wonderful. He watched for a little while and then Ella sings to him and he falls sound asleep in the seat.

He is very good natured. I am surprised to realize he is already protective of us. Someone pulled into the driveway to drop something off and he barked and stood in front of me.What a good boy he is. I love how when he sits with me how he just puts one paw over my arm and then rests his head on the paw and falls fast asleep. Everytime he sees me at my computer or sitting anywhere he gives me the cutest look and up he comes into my lap.

We love him SO much!Here are some pictures of his arrival as well as him in the seat.He is truly a joy and we love having him here.
We will keep you posted on his new home.Thank you for such a loving little guy. :)

Just wanted to drop you a line and let you know how Brock is doing. He went to the vet today and he is the picture of health. He weighs two pounds, thirteen ounces. Had one more shot and we go back in three weeks for more. The vet was astounded at how well you took care of him in reference to all his shots and the wonderful booklet you sent along with him. He sleeps from 10pm till 6am in his cage and does not cry once. Then he is up and ready for fun!

Thanks again for our little bundle of joy!
Christine

Hi Elainea, Just a short note to let you know I’m ok. The ride home to Okla. was great, I like my new family, Bill & Peggy. I had a good supper when I got home went outside and pottied like a big boy, sleep all night long.

Hey Elainea, Wallie aka (Simon) is a great little puppy!!! We love him dearly, he is just a wonderful joy. He is so smart loves to play fetch. And yes he slept in our bed last night with us, we’re probably not going to spoil him. ha ha He’s already passed the sippy cup stage and went right to drinking out of a straw, that’s just how smart he is. more later. Thanks again for the adorable puppy!

I've been meaning to write you for a while now, and I finally got some time. I just want to say thank you for the for bringing 2 families such joy in little Albert. He is so well behaved, has the best disposition, and is DEFINITELY a people dog! As you know, I adopted him as a birthday present for my girlfriend, Alyssa, who 2 years ago, lost her family dog on the day of her birthday. She had seen Albert, and feel in love with him through his pictures on your website.

He has been nothing but an absolute joy to everyone that he has come in contact with. He is very social, and gets excited whenever company is over, and loves meeting new dog pals around the neighborhood. He absolutely loves his mommy, and sometimes it makes me a little jealous that he always follows her around!

I would have never thought both our families would love him just as much as Alyssa and I do. Sometimes when my extended family talks to my parents, they even ask how Albert is doing! Alyssa's little brother even begs to have Albert stay in his room at night! Albert gives so much love and affection to everyone, that they can't help but give it all back to him.

I just wanted to give a little update on the little man, and I hope you enjoy the photos of him too. You did a great job bringing him up as a little puppy, and it definitely shows in little Albert now. Maybe one day we will get Albert a friend, and if we do, we most certainly will be contacting you! Thanks Elainea! 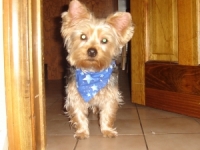 This is Sarah Neal and Jeremy Burnett. We bought a yorkie from you a year ago. We wanted to send you some updated photos now that Bentley (formerly Luke) is a year old. Bentley is a great dog. He is very smart and we couldn't love him more. Hope your family had a great Christmas. 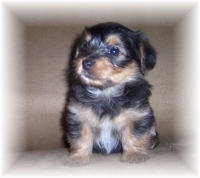 Everything is going good. I graduate in May and Jeremy and I are getting married at the end of May. Bentley is doing good as well. He has learned to sit, lay down, and stay. His favorite game is fetch. He is obsessed with tree leaves and tree limbs and has to attack them in the back yard. He does well on his leash and has a carrier that he goes places in. It's funny, all you have to do is mention going somewhere and he's loaded up in the carrier. He was pretty quick at learning to use the pee pad. Unfortunately, I recently moved back home with my parents for my last year of school and they have two male dogs, a chihuahua and a poodle. Since being around these two, Bentley has begun to mark things, even though he's neutered. However, when he's not around them he doesn't do this. The Chihuahua is his best friend. They play fight and play tag team against our cats and Misty the lab. He just went to the vet to get his yearly shots last week so I can tell you that he is now 7 lbs. He is a total bundle of energy that we all love very much. Eventually we hope to get another yorkie, this time a girl. We will definitely be getting one from you because Bentley is a great dog.